In software engineering, inversion of control (IoC) is a programming technique in which object coupling is bound at run time by an assembler object and is typically not known at compile time using static analysis. In this spring tutorial, learn the difference between ioc and dependency injection in spring with example.

1. What is Inversion of Control (IoC)

In traditional programming, the flow of the business logic is determined by objects that are statically assigned to one another. With inversion of control, the flow depends on the object graph that is instantiated by the assembler and is made possible by object interactions being defined through abstractions. The binding process is achieved through dependency injection, although some argue that the use of a service locator also provides inversion of control.

Inversion of control as a design guideline serves the following purposes:

2. What is Dependency Injection (DI)

IoC is a design paradigm with the goal of giving more control to the targeted components of your application, the ones getting the work done. While Dependency injection is a pattern used to create instances of objects that other objects rely on without knowing at compile time which class will be used to provide that functionality. IoC relies on dependency injection because a mechanism is needed in order to activate the components providing the specific functionality.

The two concepts work together in this way to allow for much more flexible, reusable, and encapsulated code to be written. As such, they are important concepts in designing object-oriented solutions.

3. How to implement IoC

In object-oriented programming, there are several basic techniques to implement inversion of control. These are:

4. Inversion of control in Spring

The org.springframework.beans and org.springframework.context packages provide the basis for the Spring Framework’s IoC container. The BeanFactory interface provides an advanced configuration mechanism capable of managing objects of any nature. The ApplicationContext interface builds on top of the BeanFactory (it is a sub-interface) and adds other functionality such as easier integration with Spring’s AOP features, message resource handling (for use in internationalization), event propagation, and application-layer specific contexts such as the WebApplicationContext for use in web applications. 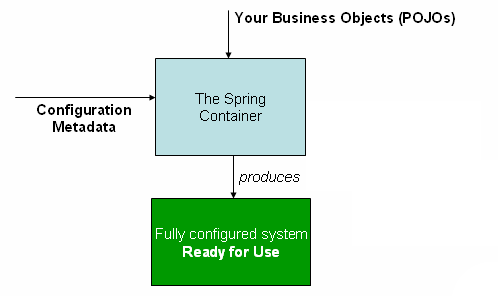 There are a number of implementations of the BeanFactory interface. The most commonly used BeanFactory implementation is the XmlBeanFactory class. Other commonly used class is XmlWebApplicationContext. Depending on the bean definition, the factory will return either an independent instance of a contained object (the Prototype design pattern), or a single shared instance (a superior alternative to the Singleton design pattern, in which the instance is a singleton in the scope of the factory). Which type of instance will be returned depends on the bean factory configuration: the API is the same.

Before we dive into dependency injection types, let first identify the ways of creating a bean in spring framework as it will help in understanding the things in next section.

5. How to create beans in Spring

When creating a bean using the constructor approach, all normal classes are usable by and compatible with Spring. That is, the class being created does not need to implement any specific interfaces or be coded in a specific fashion. Just specifying the bean class should be enough. When using XML-based configuration metadata you can specify your bean class like so:

Spring expects to be able to call this method and get back a live object, which from that point on is treated as if it had been created normally via a constructor.

The basic principle behind Dependency Injection (DI) is that objects define their dependencies only through constructor arguments, arguments to a factory method, or properties which are set on the object instance after it has been constructed or returned from a factory method. Then, it is the job of the container to actually inject those dependencies when it creates the bean. This is fundamentally the inverse, hence the name Inversion of Control (IoC).

Setter-based DI is realized by calling setter methods on your beans after invoking a no-argument constructor or no-argument static factory method to instantiate your bean.

In this methodology we implement an interface from the IOC framework. IOC framework will use the interface method to inject the object in the main class. It is much more appropriate to use this approach when you need to have some logic that is not applicable to place in a property. Such as logging support.

7.1. What is difference between component and service?

A service is similar to a component in that it’s used by foreign applications. The main difference is that a component to be used locally (think jar file, assembly, dll, or a source import). A service will be used remotely through some remote interface, either synchronous or asynchronous (eg web service, messaging system, RPC, or socket.)

7.2. How DI is different from Service locator pattern?

The key benefit of a Dependency Injector is that it allows to plug-in a suitable implementation of a service according to environment and usage. Injection isn’t the only way to break this dependency, another is to use a service locator. The basic idea behind a service locator is to have an object that knows how to get hold of all of the services that an application might need. It then scans all such services and store them as a singleton Registry. When asked for a service implementation, a requester can query the registry with a token and get appropriate implementation.

Mostly these registries are populated via some configuration files. The key difference is that with a Service Locator every user of a service has a dependency to the locator. The locator can hide dependencies to other implementations, but you do need to see the locator.

7.3. Which one should be better to use i.e. service locator or dependency injection?

Well, it as I already said that key difference is that with a Service Locator every user of a service has a dependency to the locator. It means you must know the details of service locator in terms of input and output. So, it actually becomes the deciding factor which pattern to choose from.

If it is easy and necessary to maintain registry information then go for service locator, or else simply use dependency injection as it does not bother the users of service with any per-requisites.

7.4. Which is better constructor injection or setter injection?

The choice between setter and constructor injection is interesting as it mirrors a more general issue with object-oriented programming – should you fill fields in a constructor or with setters.
Constructors with parameters give you a clear statement of what it means to create a valid object in an obvious place. If there’s more than one way to do it, create multiple constructors that show the different combinations. Another advantage with constructor initialization is that it allows you to clearly hide any fields that are immutable by simply not providing a setter. I think this is important – if something shouldn’t change then the lack of a setter communicates this very well. If you use setters for initialization, then this can become a pain.

But If you have a lot of constructor parameters things can look messy, particularly in languages without keyword parameters. If you have multiple ways to construct a valid object, it can be hard to show this through constructors, since constructors can only vary on the number and type of parameters. Constructors also suffer if you have simple parameters such as strings. With setter injection you can give each setter a name to indicate what the string is supposed to do. With constructors you are just relying on the position, which is harder to follow.

My preference is to start with constructor injection, but be ready to switch to setter injection as soon as the problems I’ve outlined above start to become a problem.

A BeanFactory is like a factory class that contains a collection of beans. The BeanFactory holds Bean Definitions of multiple beans within itself and then instantiates the bean whenever asked for by clients.

BeanFactory is able to create associations between collaborating objects as they are instantiated. This removes the burden of configuration from bean itself and the beans client. BeanFactory also takes part in the life cycle of a bean, making calls to custom initialization and destruction methods.

7.6. What is Application Context?

A bean factory is fine to simple applications, but to take advantage of the full power of the Spring framework, you may want to move up to Springs more advanced container, the application context. On the surface, an application context is same as a bean factory.Both load bean definitions, wire beans together, and dispense beans upon request. But it also provides:

7.7. What are the common implementations of the Application Context?

The three commonly used implementation of ApplicationContext are:

7.8. What should be used preferably BeanFactory or ApplicationContext?

A BeanFactory pretty much just instantiates and configures beans. An ApplicationContext also does that, and it provides the supporting infrastructure to enable lots of enterprise-specific features such as transactions and AOP.

In short, favor the use of an ApplicationContext.

In this tutorial, we learned the difference between ioc and di in spring.

16 thoughts on “Spring – Inversion of Control vs Dependency Injection”